Since June 2018, Northern Ireland councils have come to together to form the Full Fibre Northern Ireland Consortium (FFNI). The Consortium, which is hosted by Newry, Mourne and Down District Council, is comprised of the 10 councils outside of Belfast. The Consortium will implement an exciting new collaborative programme to drive greater investment in fibre and digital infrastructure across the region.

Together the Consortium developed a Northern Ireland bid for £15m of LFFN funding from DCMS. This substantial funding award will be used to deliver full fibre to approximately 880 public sector sites, under the Public-Sector Anchor Tenancy model, by March 2021.

The project will enable Councils to significantly develop their ability to deliver services and improve access for communities and residents. It is hoped that this will be the first of many such investments over the next few years.

“I’m delighted that the FFNI Consortium has secured additional funding from DCMS to support the enhancement of digital infrastructure across Northern Ireland. Investing in connectivity is essential for economic growth and prosperity and will help to further establish both Ards and North Down and all of Northern Ireland as a digital destination for investment, jobs and business infrastructure. This is an excellent example of local councils working together for the benefit of the whole region.”

"We're building a Britain that's fit for the future, and our plans for a national full fibre broadband network underpin our modern Industrial Strategy. This £15 million boost for gigabit speeds in Northern Ireland will benefit homes and businesses across the country and I congratulate the Full Fibre Northern Ireland Consortium in its successful bid.”

Currently only 12 per cent of premises in Northern Ireland have access to full fibre connectivity and outside of the major conurbations the figure is much lower. With responsibility for promoting economic development, and local knowledge, the councils within the FFNI Consortium are well positioned to drive fibre infrastructure in areas where it is most needed.

Through the FFNI programme, the Consortium will therefore help to expand the fibre footprint across the region to ensure Northern Ireland has available and affordable connectivity to support future growth and prosperity.

The Consortium’s phased delivery programme will manage LFFN investment and provide a vehicle to deliver further fibre initiatives over time. It will provide a vital local link for future DCMS digital programmes and will continue to work closely with the Department for the Economy and associated initiatives, such as Project Stratum and the Belfast Region City deal, to ensure a joined-up approach to digital investment across the region. 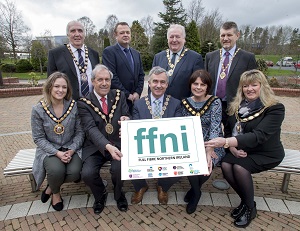 Note: Causeway Coast & Glens Borough Council also form part of the Consortium but could not attend.

We also use analytics & advertising services. To opt-out click for more information.